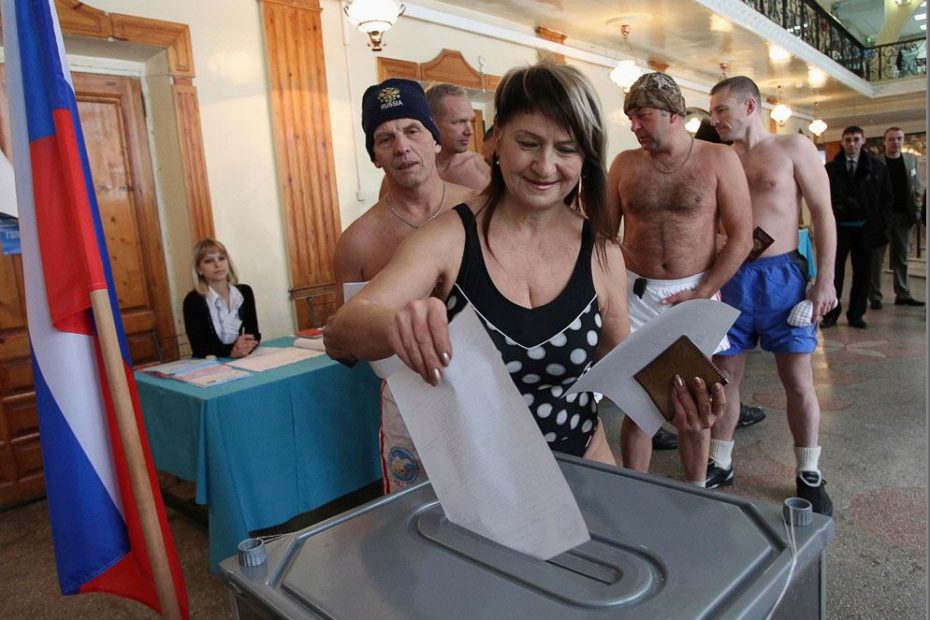 When you see all the troubles at the polls on today—the long lines, the people being turned away, the Rick Scott’s of the system refusing to budge on helping voter’s cast their ballots—don’t be surprised. That’s just how we do it in the Land of the Free.

Why can’t we be more like the Russians? They can vote in their fucking swim suits.

It’s hard to understand polls. Where do they get their numbers from and why are they so different? They often vary drastically from one pollster to the next, with one having Obama ahead by four percent and another having Romney up nine, all within the same state. Some polling companies are noticeably biased, others claim objectivity, and still others are clandestinely partisan. The numbers swing so frequently that anybody paying attention is sure to develop a case of the spins.

The polls take on different formats to try and glean likely outcomes for the election. Popular methods include randomized phone calls at different times of day, generally to landlines (but increasingly to cell phones). The biggest difference-maker is who and when they poll—even the littlest disparity between one poll and another could swing their results in drastically different directions. Think Dr. Malcolm’s explanation of the butterfly effect in Jurassic Park:

“A butterfly could flap its wings in Peking and in Central Park you get rain instead of sunshine.”

At the moment, it looks like Obama has the slightest lead in a number of crucial states, and it appears he might be able to gather the 270 Electoral votes he needs to retain office. But what happens if he doesn’t reach the mark? What happens if neither candidate automatically wins?

Welcome to another bizarre caveat brought to you by the Electoral College. According to the 12th Amendment, if no candidate receives a majority of the Electoral vote, the case goes in front of the House of Representatives. Each state delegation receives a single vote, meaning that although California has 53 representatives and North Dakota has one, both states would effectively have a single vote to cast. If each state was a person, this could be considered straightforward democracy. But since each state has wildly disproportionate numbers of people living in them, it boils down to less individual representation than already given to us by the Electoral College.

But wait, there’s more. This is where it gets even weirder. Not to be left out, the Senate is responsible for choosing the vice president, with each senator receiving a single vote to throw into the pot. Since there is an even number of states, it’s possible that the House could wind up deadlocked at 25-25, so if no president is elected by Inauguration Day, then the Senate-elected vice president acts as president until the issue is resolved.

Now, it isn’t clear if this could create a situation where the House of Representatives could elect a president from one party and a vice president from another one, but constitutionally there’s no reason why this couldn’t be the case. How strange it would be to have a majority Republican House vote for Mitt Romney and a majority Democratic Senate vote for Joe Biden? I imagine the stock market might be a bit rattled by the concept of a Romney-Biden ticket.

Our voting system is filled with strange traditions that simply don’t make sense in this day and age. Take voting on Tuesdays for instance. Why don’t we just vote on Saturday when more people have the day off?

Back in the mid-19th century, when we were a mostly agrarian-based society, getting to a place to cast your ballot generally involved traveling by horse and buggy into town, many of which were a good distance away from the farm. Saturday was seen as a workday and Sunday was off limits, as God wouldn’t want us doing our civic duty while we were supposed to be worshipping Him. And since it could take days of travel, Tuesday was selected as the most convenient day for voters. It’s very practical—for the mid-19th century.

This brings up the obvious question: Why wouldn’t they update the system to reflect the modern world? One could make the claim that the entire Electoral College system itself is antiquated, and that we would be better off with a voting process that saw every individual person’s vote count, not lumped into a sum overwhelmed by the majority of our state. Maybe we could vote on a day that was convenient for a mostly urbanized population in the 21st century. Is that too much to ask? When does practicality finally trump tradition?

When America demands that tribal communities provide access to education to women regardless of the male-dominated traditions of those tribes, we’re asking them to turn aside convention and modernize for the good of their people. But when it comes to our own form of democracy, we drag our feet at best. A true democracy would mean every single person’s vote counts, and that’s what we should be going for. The fact that our politicians do not appear to be concerned with this should raise more than a few eyebrows.

So when you see all the troubles at the polls on today—the long lines, the people being turned away, the Rick Scotts of the system refusing to budge on helping voters cast their ballots—don’t be surprised. It’s the American way.