Climate Change Is the Real Fiscal Cliff and We’re Doomed 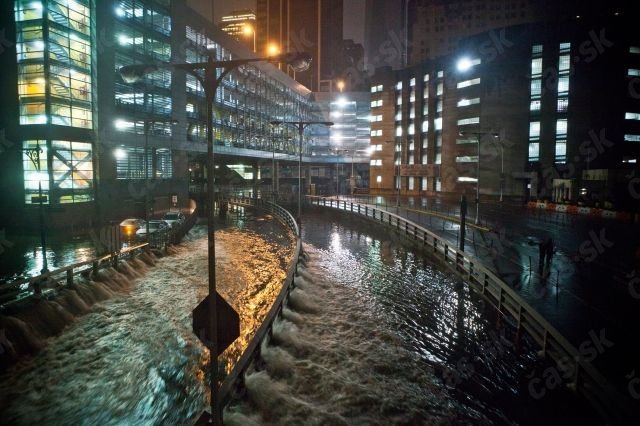 Everyone is talking about how the lack of a budget agreement by the end of the year will result in chaos, but none of them are talking about the most significant dilemma facing our country. By not addressing climate change, we’re walking ourselves off a cliff.

It’s weird to hear newscasters refer to the US budget deadlock as the “so-called fiscal cliff.” Why so-called? If they referred to it as the fiscal cliff without first letting us know it’s a made-up name, would it confuse people? They’ve been talking about it since the election, and they still need to use so-called? Why?

It’s all a conspiracy.

The name “fiscal cliff” is pretty weird in itself. I’ve fallen off a cliff before and, trust me, it’s scary as hell. Giving the budget deadlock a name that is associated with death or severe injury is a clear example of the sensationalism within our media. It’s right on par with calling a hurricane the Frankenstorm. (By the way, whatever asshole came up with that deserves a raise.)

Republican Senator Lindsey Graham, however, has no problems calling it a cliff. He’s even in your face about it. “We’re going over the cliff,” he told Face the Nation, making it clear he’s all for leading us over the side like lemmings, because falling off a cliff is definitely not a bad idea, right? In Graham’s defense, he has no choice. According to the Republican version of reality, he’s got to save us from the nightmarish hell that is the welfare state.

After the brutally long election campaign, Americans are sick and tired of this nonsense. We’ve heard it all before from the GOP, especially its arguments against taxing the rich. Considering the results of the most recent election, it’s clear that most Americans think we should be hitting up the 1 percent for more tax revenue. Yet the Republicans continue to ignore the reality of public opinion and argue that raising taxes on the rich would be detrimental to the country. The Democrats refuse to put entitlement programs like Obamacare on the chopping block, which makes sense considering Obamacare and other social safety net programs are what they ran on in the past election. Deluded and despondent, the Republicans, in turn, just refuse to negotiate.

“The president’s plan when it comes to entitlement reform is, quite frankly, a joke,” Graham went on to say. “I don’t think they’re serious about finding a deal.”

Great, just great. Why even bother with an election if idiots are going to work as hard as they can to not work with each other? Like always, the real losers are all of us. What’s that term that the military uses for civilian casualties? Oh yeah—collateral damage. That sounds about right.

Grover Norquist, the whiney asshole that holds no political power other than forcing conservatives to sign the dumbest pledge of all time, is standing tall on this one. Based on his understanding of economics (which was shaped around trickle-down Reaganonmics), the only way the country as a whole can succeed is if the wealthiest members of the country get as much money as possible.

It’s important to understand the intellectual argument for why rich people deserve to make more than poor people. It’s the reason why the CEOs of Hostess are given executive bonuses for helping drive the company into the ground while the company’s workers are given pink slips. It goes like this: According to neo-classical economics (i.e., rich people economics), the wealthy are naturally better at using their money than poor people, hence the reason why they’re rich to begin with. Taxing the rich and redistributing it to the poor destroys the incentive to get rich in the first place, meaning nobody will do anything anymore and we’ll all be fucked, just like (as Mitt Romney tried to convince us) Greece is.

“The president’s plan does nothing but damn us to becoming Greece,” Graham said, failing to mention that Greece, a small island with limited natural resources and international clout and a chronic tax-evasion problem, is nothing like the United States.

The Republican’s arguments are divisive and scripted to please their target audience. Everybody knows that, and everybody’s jaded because of it. But that’s not good for ratings. The media has to figure out a way to sensationalize something as boring as the budget deadlock in order to keep us glued to news, and because of this they call it a fiscal cliff.

The media thrives on this kind of viral shit. They love to use it with natural disasters especially. Snowpocalypse, Snowmaggedon, Snowtorious B.I.G., so on and so forth. The Frankenstorm is only the most recent of a long line of fear-inducing titles created by a media that apparently didn’t think “storm” was dramatic enough.

If you want some actual drama, consider this: The estimated cost of Hurricane Sandy is now more than $60 billion, and that doesn’t take into consideration the amount of money lost in disrupted business. Moreover, this is the second year in a row that New York has been hit by a hurricane. A number of environmental conditions were responsible for creating Sandy, and at least one of them, a warmer ocean, isn’t going away. And as the ocean gets warmer, the likelihood that these storms will become both more common and more severe gets higher. As water levels rise, coastal cities like New York, Miami, and especially New Orleans are going to be fucked, and dealing with the effects of global warming is going to cost us an unprecedented amount of money.

In other words, by not addressing climate change, we’re walking ourselves off the fiscal plank.

The Republicans, the Democrats, and the media all want to talk about how the lack of a budget agreement by the end of the year will result in chaos, but none of them are talking about the most significant dilemma approaching our country. When are they going to give climate change the respect it deserves? Why wasn’t it brought up in the debates? More importantly, are they going to wait until shit hits the fan before addressing it? Why do I feel the answer is yes?

When watching both sides bicker about taxing the rich and giving to the poor, I can’t help but think that this is a precursor to how we’re going to handle the inevitable. We’re screwed. It’s a problem so large that nobody wants to think about it, but there’s going to be a point where we have no choice. We might as well deal with it now. First step? A solid name.

When the media finally sensationalizes climate change with a scary pop-culture reference, we’ll probably finally feel comfortable talking about it. We need a name that’s catchy and provocative, like Geozilla, Terra Fuego, or the Fourth Reich. Maybe something pulled from Captain Planet or Apocalypse Now? Weather Wolf is pretty good. Coming up with a new name for global warming is like coming up with a name for a band—the most important part.

In the meantime, Lindsey Graham and the rest of his cohorts can shove it. Remember, it’s all a conspiracy. None of this matters in the scheme of things. Dealing with the so-called fiscal cliff is going to be cakewalk compared to the storm that’s on-deck. Geo G. Allin, the bastard son of El Niño, is coming to shit all over the planet, and we better start working on a solution before it’s too late. But then again, judging by the way we’re handling the fiscal cliff, we’re probably fucked anyway.