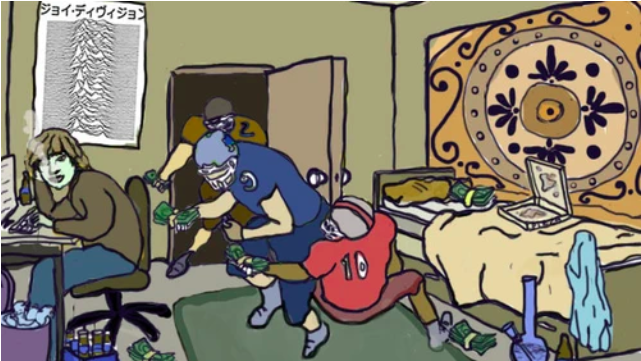 For years, I willingly did the economics homework for a number of student athletes. To this day, I don’t regret it. Helping them cheat doesn’t seem any more unethical than forcing them to learn about how “great” capitalism is in the first place.

People were outraged when basketball player Rashad McCants admitted on an episode of ESPN’s Outside the Lines that student athletes pay tutors to write their term papers. What the former University of North Carolina at Chapel Hill basketball player revealed wasn’t a big surprise to me. But the sports world freaked out, and commentators, columnists, and fans bickered over ethics, the lack of oversight in the NCAA, and the opportunistic nerds who get the athletes A‘s.

For years, I willingly did homework for a number of student athletes. To this day, I don’t consider any of it unethical. It all started back in 2007, when I was finishing up my degree in radical economics at the University of Utah, which is also a Division I school. To help cover food and booze, I worked a variety of odd jobs including tutoring undergrads.

Tutoring worked like this: I’d tell the campus tutoring center which classes I could tutor, and when a student came in and asked for help in one of those subjects, the center would pair us together. The students would pay $10 for a “slip” from the tutoring center. They’d give me that slip at the end of each session and I’d turn it back into the tutoring center and wait for my measly check. I made a whopping $6.25 per hour, which was just enough for a pint and a bagel. The school pocketed the leftover $3.75 an hour—I guess they had to make theirs too, on top of my massive tuition and the beaucoup bucks coming in from sporting events.

After awhile, I started getting more and more requests from football players who needed help with their economics courses. They liked that I swore a lot and didn’t give a fuck. Eventually, I became the go-to tutor for jocks. At first, I tried to help them work through their boring macroeconomics multiple-choice homework, but it became more and more apparent that they didn’t care about learning any of it. The kids always seemed tired and disinterested in economics in general. I couldn’t blame them for the latter—introductory economics is almost as boring as a seminary class. But I painstakingly did my best to explain how widgets fluctuate along abstract supply-and-demand curves.

Then, one day, an offensive lineman cut straight to the chase. His tutoring slips were covered by his athletic scholarship, so the slips didn’t have any monetary value to him. Because of this, he was more than willing to give me three hours worth of tutoring slips if I’d just do his homework. After all, it would take 15 minutes for me to do it myself, versus the two hours it would take me to explain the shit to him. I didn’t even hesitate before saying yes. I mean, so what? He didn’t have to worry about taking tests—his grade was completely based on multiple-choice homework. And helping him cheat the system didn’t seem any more unethical than forcing some kid to learn about how great capitalism is.

I did the homework for guys like him all semester long, making sure to randomize a few incorrect answers here and there. In the end, all the kids I worked with got A‘s. I made more money than I would have otherwise while helping them stay in good academic standing with the school, effectively keeping them on the field. If the university knew about it, they would have probably reacted negatively in public. But I have no doubt that those athletes making it to a bowl game were far more important to the school’s administration than making sure they understood marginal rates of transformation.

I bet you’re wondering if the coaches know about the cheating. How could they not? But as long as nobody got caught, it wasn’t a problem. It’s far more important to coaches that their players attend practice than some trivial art-appreciation class. And let’s face it—coaches are paid based on their team’s performance on the field, not in the classroom. Although it’s nice to boast that your quarterback is a 4.0 student, if your team is zero for 12, his good grades don’t mean shit. The highest paid public employees in most states are either football or basketball coaches. They’re not stupid people. They know what form of success the universities are looking for. So the argument that the athletes I helped cheat were taking advantage of public tax dollars is a moot point when you consider how much these coaches are paid.

The NCAA’s response to McCants’s comments was predictably vilifying to him and cheating athletes like him in order to protect their business, which is built on the broken bodies of young people. The NCAA isn’t concerned with the future of student athletes—they want profits. The only reason reality and illusion overlap is because they make their money off the athletes. Do you think a one-and-done prospect really cares about introductory sociology, or that his school really cares if he cares? As long as the university is making money, everything is peachy keen.

Beyond the guise that they actually give a damn, there is another way they are misleading the public on this “scandal.” UNC publicly said the fraud was limited to the Afro-American Studies program, which is a dog whistle that implies that only black kids were the ones doing the cheating. It was almost like UNC was saying, “Sure, Rashad McCants cheated, but it’s because he’s black and didn’t know any better. You know how those people are. They’ll take advantage of every freebie, the same way they cheat welfare programs. White athletes, on the other hand, inherently care more about their education. Just ask Johnny Manziel.” That line of thinking is fucking bullshit. In my day, I helped a ton of dumbass white athletes cheat their way to good grades.

To be sure, academic fraud is alive and well throughout the system. Just go online and search “write my paper” and you’ll find countless companies who will pen a term paper for the right price. Students help one another cheat, professors get caught plagiarizing one another’s papers, and scholars get paid handsomely to conduct specious studies to debunk real shit like climate change. Let’s not even bother bringing up student loans—a system that has cheated this generation’s middle class youth out of a future. Our education system is just one giant hustle—and if you ain’t hustling, you’re getting hustled. The only reason athletes are being singled out is so that universities and the NCAA can claim the moral high ground as they continue to exploit young people.

As every tutor knows, there’s a fine line between helping someone do their homework and actually doing it for them. These days, I tend to force my students to work through their coursework, mainly because it takes longer and I can charge upwards of $50 dollars an hour. Not to mention, I’m a rather sadistic individual… But I don’t see a problem with student athletes cheating. As far as I can tell, that’s the American way.