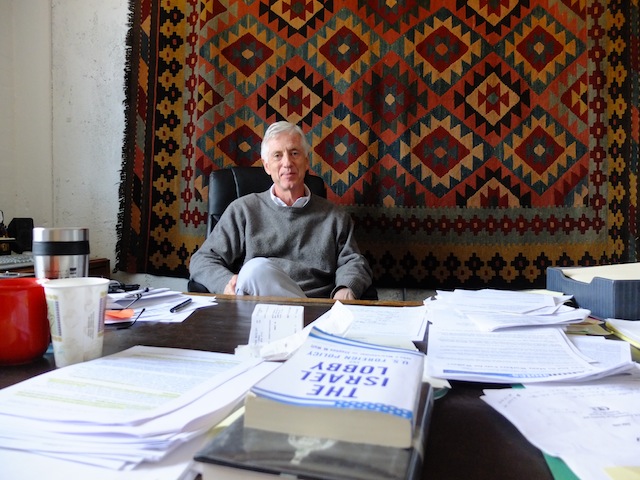 Ross “Rocky” Anderson is the former mayor of Salt Lake City who worked with Mitt Romney during the 2002 Winter Olympics. He’s running for president as a candidate of the Justice Party, which he created to campaign on a platform of social justice. We sat down with him to talk about the upcoming presidential election from his eyes.

Being trapped in this presidential election’s echo-chamber bombarded with talking points and half-truths from both Mitt Romney and Barack Obama, it’s easy to forget that there are third-party candidates out there who are actually saying things and sharing ideas that are worth caring about. Ross “Rocky” Anderson is a perfect example of one of those candidates. The former mayor of Salt Lake City is running for president as the nominee of the Justice Party, which he created to campaign on a platform calling for campaign finance reform and an end to the Bush tax cuts, among other issues. What makes him stand out from other candidates who have similar policy prescriptions is that he worked closely with Romney on the 2002 Winter Olympics—the pair got along so well, they even traded campaign endorsements after the games. Today, Rocky and Romney couldn’t be more diametrically opposed. Rocky’s campaign is based on the novel idea that justice—economic, social, and environmental—is vital for the wellbeing of our nation, while Romney… Well, I don’t think any Republican has said the words “social justice” in the past two years.

Not only is Rocky dissatisfied with Romney, he also believes our government’s current trajectory, which has been set by Barack Obama, is unacceptable. He thinks if the next president governs like it is business as usual, it will lead to catastrophic consequences.

Since I was stuck in Utah thanks to Hurricane Sandy, I decided to take the opportunity to sit down with Rocky and talk to him about his campaign, mobilizing young people, and why Mitt is a slimeball and Barack is a war criminal.

VICE: Why even bother running as a third party candidate?
Ross “Rocky” Anderson: Because this country needs to be taken in a different direction. Although we knew there was no chance of prevailing in the election, we could certainly prevail in helping launch and sustain a broad-based democratic movement that will eventually bring about change.

I thought Obama was going to bring about change?
Those who are elected take advantage of a corrupt system that has brought us the plutocracy we have today. They should never be trusted to reform that system. Today is not unlike the situation before woman’s suffrage or the labor and civil rights movements. There was so much inertia on the part of our elected officials that it took people at the grassroots level organizing, mobilizing, and making it clear that they were not going to let up until there was change. Further complacency by the American people will sustain the status quo and exacerbate it. The mantle of leadership is on all of us, hence the call for an engaged, broad-based citizens’ movement. And that’s what this campaign is all about, that’s what the Justice Party is about. That’s why you’ll hear me talk so much about not just about this election, but what needs to be done beyond this election.

**How can we counter voters simply not giving a damn? ** We have to pay attention to psychological and linguistic research. For instance, people who are self-described conservatives are much more likely to hang on to their worldview regardless of the facts and the evidence. You can see that with respect to evolution and certainly towards climate change. Our job is to keep paying attention to that research and not to keep rolling Al Gore out to talk about climate change. We need to utilize the religious leaders and the business leaders who can make the case within the context of a lot of people’s pre-existing views and value structures.

It’s interesting that you bring up climate change. I watched all the debates and thought it was strange that the topic wasn’t discussed.
You didn’t watch all of them then, because in the third-party debates, we certainly raised the issue.

Fair enough. So why do you think climate change wasn’t brought up in the mainstream debates?
The moderators failed once again to raise the most urgent issue facing our planet. The moderators’ neglect of was simply a continuation of the corporate media’s irresponsibility towards the topic for years. But the reason the candidates don’t raise it is explained well in the introduction to Al Gore’s first book on the topic, Earth in the Balance. Even back then [in 1992], when he tried to raise the issue in the primary debates against Clinton, he was completely dismissed. It was a sleeper issue for both the media and voters.

Yeah. It is a shame that it still is today.
Unless a candidate has the guts to raise the issue regardless of the political consequences, they’re going to leave it alone. They’ll find other topics that are more advantageous. The reason you’ll hear Jill Stein, the Green Party candidate, and me raise climate change in all our presentations is because we’re trying to be honest, regardless of what the polls show. And we’re both concerned with the long-term effects it has on all of Earth’s inhabitants. We’re leaving a shameful legacy and our children and grandchildren are going to look back and wonder what we were doing by continuing with business as usual when all of the evidence is there, not only regarding the causes and consequences, but also the solutions.

Do you think some people are coming around?
There have been a lot of religious leaders and corporations who have issued very strong statements on the crisis and on the need for urgent action. But the environmental and human rights community have blown it in terms of their messaging. Then of course there’s the misinformation campaign from the other side. Taken together, those two things are why we see in the face of even more robust science, a decrease in public support for climate protection.

You were the mayor of Salt Lake during the 2002 Winter Olympics. What was your relationship with Mitt?
It was positive. We had a constructive and friendly working relationship. We were candid with each other and I admired his leadership and the loyal team he put together to pull off what was probably the best Winter Olympics ever. I also viewed him as a moderate, reasonable person and thought that he was the kind of guy who could return some sanity to the Republican Party by moving it away from the far right.

Is that why you endorsed him and cut an ad for him during his campaign to be the governor of Massachusetts?
Yes. He ran on a moderate and reasonable platform. If he hadn’t presented himself that way, he would have never been elected in that state.

But now he’s changed?
The Mitt who has emerged during this presidential race is a diametrically different human being, a man who has no core of principles. He makes me wonder if I was fooled along with Massachusetts’s voters, because I can see changing your position on one or two issues, but not this wholesale transformation the day you decide to run for president. His lack of integrity is troubling to me, because if a man is willing to do that to get elected, who knows what he’d do in office.

Why do you think people should vote for you? It’s kind of like throwing your vote away.
The government is shafting the people of this country. It doesn’t matter which party is the majority, they’re all feeding at the same trough of special interest money and we, the American people, are suffering from it. We’re in the midst of a new Gilded Age, with a greater disparity between income and wealth since the 1920s and the highest poverty rates since 1965. It’s as if all the gains of the war on poverty have disappeared. That along with our outrageous healthcare system, including Obamacare, results in incredible suffering, including the loss of tens if not hundreds of thousands of lives every year.

What’s the solution?
People in this country want something better. On most major issues, I represent what the majority of what people say they want. Mitt Romney and Barack Obama do not. Whether it’s ending the war on drugs, ending the budget-busting Bush tax cuts, providing single-payer Medicare for all, cleaning up our campaign finance system—all of these are things that I’ve talked about that Romney and Obama don’t.

So the government is our enemy?
President Obama keeps saying his formal duty is to protect the American people, but the protection a growing number of Americans want is from our own government. This president thinks the federal government should be able to kidnap any of us and imprison us for the rest of our lives without charges, trial, legal assistance, or the right to habeas corpus. It’s astounding. It’s the most un-American, subversive act ever by a president. And yet, Democrats who would be raising holy hell if this were done during a Republican administration seem to just blindly fall in line and support this man who has taken on the role of a tyrant.

Yeah, that really bothers me…
You know, you hear the slogan, “We’ve got to take our government back.” It’s never needed to be applied with more force than right now. The American people have to unify around these issues: corruption, the expanding imperial presidency, the shredding of our constitution, our  illegal wars of aggression, and all the toadying to Wall Street and the financial industry. We need to stand up against all of that and say we will not put up for it anymore. If we don’t, it’s all going to get worse.

I see where you are coming from. But is Obama that bad?
Are you kidding? We have a president who targets US citizens for assassination. Through his killing program, at least three American citizens have been assassinated in drone strikes, including a 16-year-old boy from Denver, Colorado. Obama showed his true colors when he was in the Senate and voted to grant telecommunications companies retroactive criminal immunity for their federal felonies for cooperating with the Bush administration’s illegal surveillance program.

Yeah, that’s scary.
They could be tracking you. They could find out from the library what books you’re checking out, they could go to you web provider and find out to whom you’re sending emails, what websites you’re accessing. It’s like the KGB in the Soviet Union, but so much worse because of advances in technology.

Do you plan on running again?
No. After Tuesday, I’m looking forward to the flexibility to teach, speak, mobilize, and write.

A lot of my friends feel like there’s no point in voting, nothing’s going to change. Why would you say it’s important that my friends and me vote?
You’re never going to see change if you just sit things out. When I hear John Mayer sing, “Just sit back and the world will change,” that is the most immoral, irresponsible message, especially for young people who are going to face the results of all of this in the future. Most social progress movements in this country came about because of young people pushed for them. To remain complacent and say, “Why should I bother because there’s too much money involved?” or, “It’s already too corrupt,” that is such an unbelievable cop-out. People who don’t stand up and fight at every level to bring about change, they are the enemy. They are as responsible as the wrongdoers, because if you see wrongdoing and don’t stand up against it, you’re on the side of the status quo.