Photographer Kelsey Bennett has been receiving a lot of press lately for her photo series documenting soul singer Charles Bradley, a James Brown impersonator. Milk Made got a chance to sit down and talk with Kelsey about her work and future endeavors.

Milk Made: How did you come up with the idea of documenting the life of a James Brown impersonator?

Kelsey Bennett: My friend lived across the street from this place in Bed-Stuy called the Tip Top Bar and Grill. Black Velvet [Charles Bradley] plays there a lot, and my friend told me I had to see this amazing guy play, so we all went that night. It’s great: you get a ticket at the door that covers an all-you-can-eat soul food buffet, and the room makes you feel like you’re in another place in time. There were amazing soul singers that open up for him, but when Black Velvet got on stage, he just blew me away. He was incredible; he split the room open. Afterwards I asked him if I could follow him around for a week and photograph him.

MM: That must have been daunting… I consider myself a portrait photographer, so to hone in on that and really fine tune that part of the craft means to develop a relationship with the person I’m shooting. It makes you feel closer to your art. It’s also more fun when I’m doing projects that are on a dare, and that was a big part of it: going up to somebody and asking if I could follow them around. It’s such an odd question! I asked Black Velvet and he didn’t skip a beat, he just asked, “Do you think it will make people happy?” Of course I said yes, and then the next day I met him at his mom’s house.

MM: How did your relationship with him develop?

KB: I remember the first day I was with him. We were in his mom’s basement, just talking. I would occasionally pick up the camera off my lap and take a shot, but really I was just getting to feel comfortable sitting with him. He’s an incredible person with the kindest heart ever, the sweetest, most beautiful person, and we became really close. When he asked me, “Will this make people happy,” he wasn’t just saying that–he meant it. He wants to make people happy through everything he does.

But he also asked me on that first day this very serious question, “Do I seem like somebody that’s happy now or somebody who is on their way to being happy?” He started telling me about all the things that meant so much to him in his life, like being known for his music and being able to take care of his family.

MM: Did you have an answer?

KB:: I just thought about the question but didn’t answer it. A year later, the question resonates with me. It’s come back in a really strong way, and now that all the things that he wanted in life are coming true, I can say that he was on his way to being happier. He’s been performing since he was 16 years old, and he’s 62 now and at the height of his career, which is incredible and inspiring.

MM: The height of his career as a James Brown impersonator?

KB: As Charles Bradley. He wasn’t at the 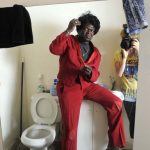 opening last night because he was on Jay Leno. He writes and sings his own music under Charles Bradley. He has his Black Velvet gig that he does in Brooklyn, but he also has his Charles Bradley act that he tours the world with. He’s opening for Stevie Wonder at the Hollywood Bowl this summer. Things have changed a lot for him.

MM: Crazy! Does he keep the same James Brown style when he performs as himself?

KB: Yeah, he does, with the costumes and everything. He designs all his outfits himself and his mother’s friend makes them by hand. He finds evening gowns at thrift shops and gets them sewn together to make his Black Velvet capes. His entire wardrobe is handmade. I just saw him play as Charles Bradley and he was wearing a red jacket with rhinestone initials CB on the front and BV on the sleeves. So both of his identities are inscribed on his jacket, just as both identities are inscribed, or will be inscribed, on his legacy.

But there are some big differences between the two identities. The material he sings about as Charles Bradley is very emotional for him, with songs about subjects that resonate with him personally. Being Black Velvet gives him a chance to have fun and let loose. When he becomes James Brown, he gets to forget about everything else and celebrate the music of this person that changed his life.

MM: So, there’s this opportunity for release as an impersonator…

KB: Exactly. But I do think impersonator is kind of a dirty word when it comes to this because when you see him perform, it’s not like he’s an impersonator, you know? There’s nothing hokey about it. Charles Bradley is somebody who is so dedicated to what he does and has so much passion behind it that his whole soul goes into the performance. It’s more of an ode to James Brown than it is an impersonation. It’s really interesting to see. Where does Charles Bradley end and where does James Brown begin? I see it as the James Brown persona weaving in and out of the person of Charles Bradley.

MM: What is his persona like in his mom’s basement compared to when he’s on stage?

KB: When he is just hanging out, he is more relaxed. He’s constantly working and playing shows, but his personality when he’s at home is how I described him, wanting to make people happy and being a loving person. He’s so fun, a great person to be around. On stage, Charles Bradley is incredible. He’s got so much raw power and energy, he always blows me away. He’s 62, and his dance moves are fucking amazing! Even when he’s so worn out from traveling and working, he gives the most energetic, passionate performances. I don’t know where he gets his energy from. He just does it–that’s what he loves to do. It doesn’t matter what state he’s in, he could muster up that energy anytime. It’s amazing…

MM: If you think you caught one thing in your photos, what would you say it is?

KB: I definitely caught the transition from being Charles to Black Velvet. Wearing the costume of a different person fascinates me. That’s why I did shots of him with his costume because he’s about to enter a different persona. There’s something magical about that whole transition from a regular guy on the street to an icon. I also caught something I really value, the trust that developed between the two of us. I was happy to see that there are certain photos that document it developing. My favorite photo has him hanging out showing me his closet with his cape thrown over his shoulder. To me, he’s on the threshold of going from Charles Bradley to James Brown, like the next persona is waiting in the wings. There’s an expression on his face that shows our trust developing. That to me shows the two things I wanted to capture, the transition and trust.

MM: What are you working on now?

KB: I’m shooting photos for my grandfather’s [Tony Bennett] new record Duets II. He’s done duets with about 18 different singers now, and I’ve been traveling around with him documenting it. We travelled to the Calabria region in Italy where our family is from, and then to London to do Amy Winehouse at Abbey Road, which was really fun, and next is Lady Gaga, so… it’s exciting! I just photographed Aretha Franklin, and that was incredible. I also get to set up a really cool vibe room and design it for the particular artist in a way that makes sense for each of them.

MM: I bet the photos of those people in their individualized rooms look pretty awesome…

KB: Totally! Amy Winehouse is the one of the artists I’m most excited about. There’s this room in Abbey Road that’s covered in weird, geometrical, angled mirrors, and when you photograph somebody there, you see their reflection in crazy places. That’s where I got to photograph Amy. Another great experience was photographing Willie Nelson on his tour bus. He works, makes art, and travels with his family as well, so I felt like we all had a lot in common.

MM: One last question. If you were gonna impersonate somebody, who would you choose?

Editor’s Note: This interview was conducted before Amy Winehouse’s tragic and untimely death. Kelsey Bennett wishes to clarify that she was shocked when she got the news of Winehouse’s passing, and that she is honored to have had the opportunity to photograph such a great talent.